What are Vascular Lesions?

Vascular lesions are generally classified their pathology, age and onset.

The treatment of vascular lesions with light began in the 1900`s and was based on work by Anderson and Parrish.

Laser or intense pulsed light energy selectively targets the chromophore of the vascular lesion by utilising the correct wavelength of applied light along with the correct energy and pulse durations.

The pulse duration is set at less than or equal to the amount of time it takes for the skin to cool by 50%. The energy delivered is very target thus restricting the thermal diffusion to areas around the lesion preventing additional damage. The target chromophore for vascular lesions is oxy-haemoglobin and so laser damage is restricted to the blood vessel of source of blood.

Argon laser- This was the first laser to be used on Telangiectasia and operates in the 488nm -515nm region. Argon is no longer readily used in cosmetic laser procedures.

KTP laser 532nm- This is a very effective laser in the treatment of vascular lesions as it is very close the absorption peak of oxy-haemoglobin. However, 542nm KTP laser does not allow for deep penetration making some structures difficult to target. Larger pulse durations can help to combat this shortcoming.

IPL - ~500-1200nm Known for effective treatment of most vascular lesions. Wavelength specific hand-pieces are required for the particular lesions to be treated making it very expensive in the long run.

Diode laser 810nm – Poorly absorbed in water but selectively absorbed by haemoglobin. Good results in the treatment of venous lakes due to its high intensity.

Nd:Yag laser – 1064nm which has gained popularity due to it being highly absorbed by haemoglobin and less absorbed by melanin making it safe to use on all skin types and it can penetrate deeper than other sources.

Telangiectasia prior to laser treatment: 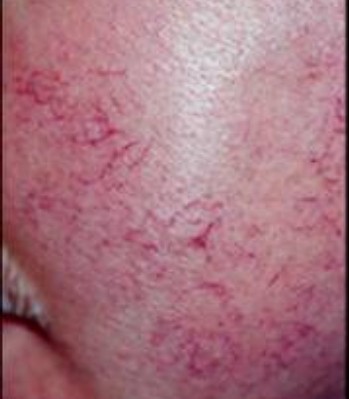 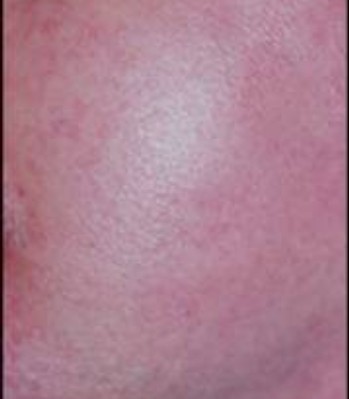