Rosacea is a skin condition that can cause flushing, redness, spots and noticeable blood vessels; usually on your cheeks and nose. You may have some or all of these symptoms. The condition can be more severe in some people than others  and it can also come and go over time.

Rosacea sometimes looks like acne and other skin disorders. It’s a lifelong skin condition that affects about one in 10 people over the age of 30. People who are fair-skinned are more likely to get rosacea. It’s more common in women, but the symptoms are often more severe in men.

The exact causes of rosacea are not known although a number of factors are said to influence it.

It is the presence of these peptides which can affect the vascular supply to the skin. Again this can cause a dilation of the blood vessels.

As far as is known there is as yet no known cure for Rosacea but they are treatments available for the control of the condition. The treatment regime no matter what it is can be long and includes self-help as well as medication or laser treatment.

How laser treatment off Rosacea works.

When necessary, lasers may be used to reduce extensive redness, correct nose disfigurement and eradicate visible blood vessels. A gentle skin-care routine can be invaluable in helping to control Rosacea. In general, non-irritating skin-care products are advisable and protection from sun exposure by using a strong sunscreen also helps.

Both laser and intense pulsed light units produce a narrow beam of light energy. This beam of energy is directed towards the visible blood vessels in the skin. The energy is then absorbed by the target chromophore, which in this case is the blood causing damage to the blood vessels resulting in their shrinkage. The structural change leads to the body no longer recognising the proteins in the vessel wall, and these are then removed by the body’s immune system

The procedure is quick and easily administrated, with results often seen immediately but a course of treatments is going to ensure the best possible results. The laser or intense pulsed light treatment is unlikely to cause scarring or damage to the surround area.

Some of the side effects of the laser treatment though can be:

Any such side-effects will generally only last a few days

Which laser is best to use? 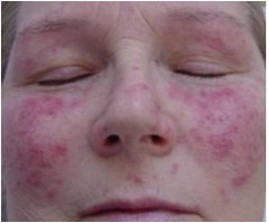 Rosacea, prior to treatment (Above) and following laser treatment (Below) 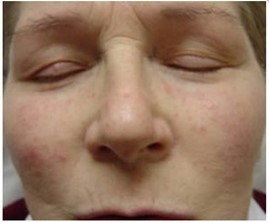