The History of the Development of the first Laser

If you had to pick a date in history to begin following the history of the development of LASER, you could do worse than the 3rd March 1917 – the date that Albert Einstein’s treatise “On the Quantum Theory of Radiation.” was first published.

In that influential work, expanding on work previously done by Planck & Wein, Einstein postulated that, under certain conditions, discrete packets of energy, “photons”, could be emitted and absorbed by atoms.

“….It was obtained from the condition that the internal energy distribution of the molecules demanded by quantum theory, should follow purely from an emission and absorption of radiation…”

Specifically, Einstein proposed that, in isolation, an excited atom can return to a lower energy state by emitting photons, a process he dubbed “spontaneous emission”.

Spontaneous emission sets the scale for other radiative interactions, such as Absorption and Stimulated Emission.

Atoms will only absorb photons of the correct wavelength: when such a photon enters an atom, the photon is absorbed and the atom goes to a higher energy state, which then allows for spontaneous emission.

Einstein extended his theory to predict that, as light passes through a substance, it could stimulate the emission of more light. He postulated that photons prefer to travel together in the same state. If there is a large collection of atoms containing excess energy, they will be ready to emit a photon randomly. However, if a stray photon of the correct wavelength passes by, its presence will stimulate the atoms to release their photons early and those photons will travel in the same direction with the identical frequency and phase as the original stray photon. A cascading effect ensues: as a multitude of identical photons moves through the remaining atoms, emitting ever more photons to join them.

This inspirational piece of physics formed the cornerstone for development of the theory of stimulated emission of radiation, which was expanded further by many scientists including the American physicist, Gordon Gould; who is widely, but not universally, credited with the invention of the LASER.

LASER, an acronym of the phrase Light Amplification by Stimulated Emission of Radiation and describes a device that creates and amplifies a focused beam of coherent light. In a laser, the atoms or molecules of the lasing medium are “pumped,” so that more of them are at higher energy levels than at the ground state.

In comparison “MASER”, an acronym for "Microwave Amplification by Stimulated Emission of Radiation", is a device that produces coherent electro-magnetic waves through amplification by stimulated emission.

It was Gould who, in 1956 while working towards doctoral degree at Columbia University, proposed using optical pumping to excite a maser to achieve amplification of visible light. He realized that it could be possible to make an appropriate optical resonator by using two mirrors in the form of a Fabry–Pérot interferometer. Unlike previously considered designs, this approach would produce a narrow, coherent, intense beam.

Gould recorded his idea together with some possible applications in a laboratory notebook under the heading "Some rough calculations on the feasibility of a LASER: Light Amplification by Stimulated Emission of Radiation" – which is the first recorded use of this acronym.
The history of Science is cram-packed with individuals and teams working in conjunction with each other and in direct competition, and it is often the case that history books record the names and successes of very few of the participants.

One of those Gould discussed his ideas and calculations with was a fellow professor at Columbia, the maser's inventor, Charles Townes; who subsequently jointly won the 1964 Nobel prize in Physics for his work on the maser and the laser, far surpassing the public recognition ever given to Gould. Townes gave Gould advice on how to obtain a patent on his innovation, and agreed to act as a witness.

Keen to achieve a patent on his idea, and falsely believing that he needed a working system to do this, Gould left Columbia without completing his Doctoral Degree and joined TRG (Technical Research Group), a private research company.

A significant factor in speeding the development of Laser was a perceived need at the time by the Americans to ensure they were not left behind in the space / arms race. The US made extensive funding through the Pentagon’s Defence Advanced Research Projects Agency into both private and public laboratories across the United States to fund the creation of new spacecraft and a working laser.

Gould convinced TRG to support his research, and they obtained funding for the project from the Advanced Research Projects Agency. Unfortunately for Gould, in the 1950’s such pentagon-sponsored work was considered secretive and the government declared the project classified, meaning that a security clearance was required to work on it. As a former participant in communist activities, Gould was unable to obtain such clearance. He continued at TRG, but was unable to contribute directly to the project.

Due to technical difficulties and, quite possibly, as a direct result of Gould's inability to participate, TRG was beaten in the race to build the first working laser by Theodore Maiman at Hughes Research Laboratories in California, with the development of a Ruby Laser.

Theodore Harold "Ted" Maiman (July 11, 1927 – May 5, 2007) was an American engineer and physicist’. In 1956, Maiman began work with the Atomic Physics Department of the Hughes Aircraft Company (later to become Hughes Research Laboratories or HRL Laboratories), where he led a project for the U.S. Army Signal Corps, to redesign the ruby maser, reducing it from a 2.5-ton cryogenic device to a system of just 4 pounds while at the same time improving its performance.

Maiman was considering the technicalities of a solid-state laser design even before he undertook the maser project at Hughes, and recognised that increasing the microwave frequency of masers 50,000-fold up the electromagnetic spectrum to the frequency of light would require finding both a feasible lasing medium and excitation source. His eventual design incorporated a synthetic pink ruby crystal as the lasing medium with a helical xenon flash lamp from General Electric as the excitation source.

On 16th May 1960, Maiman successfully fired the device and the worlds’ first laser was born. 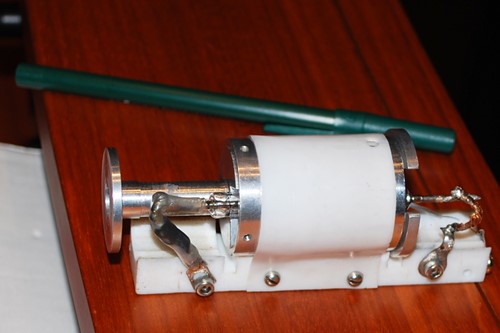