Are you considering purchasing a Syneron Candella system? Before you buy new, check out our range of alternative used systems on the Laser Market's Used-Laser Sales Directory, or ask us about our laser warehouse stock for direct sale with guaranty and engineering support.

This laser is another of the pico-second lasers to hit the aesthetic market place. A pico laser is different to a nano second laser in that the pulses are shorter, so rather than delivery a photo thermal effect they deliver a photo mechanical effect.

The PicoWay has two distinct wavelength’s 1064nm and 532nm in one system allowing the treatment of a range of unwanted tattoo’s and tattoo colours as well as treating pigmentation.

The PicoWay also has:

Why is picosecond a consideration?

It is firmly believed that shorter pulses of energy when delivered to a pigment are more efficient than longer pulses of energy ie nano second. This shorter pulse is more efficient for converting the laser energy into mechanical stress. It is this mechanical stress that causes the particles of pigment to fractionate. The smaller the fractions of pigment the easier it is for the body to remove.

The other things to remember with Picosecond lasers at present is that the can be both:

Whilst the improved efficacy of pico-second over nano-second lasers is still being questioned, these are important aspects to consider if you believe the hype over Picosecond lasers? 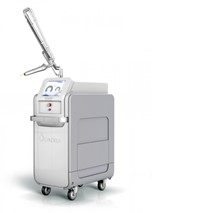