Designed for ultimate versatility, LightWalker lasers provide one of the most comprehensive lists of clinical applications available on any dental laser. With both tipped and tipless hand-pieces, your clinical options are almost endless.

LightWalker Dental Lasers offer the highest standard of dental treatment, and at the same time simplicity of use in:

A choice of three separate models, ensures a LightWalker laser system ideally suited to your needs:

Just choose the treatment and the laser automatically sets your optimum starting parameters. With easy-to follow protocols and touch-of-a-button treatment settings, you’ll be able to perform every dental procedure with confidence and high success rates, bringing in extra income to your practice along the way.

You can even upgrade the AT model to perform aesthetic skin treatments such as skin rejuvenation and removal of benign and vascular lesions.

Three models to choose from

3 systems to choose from including the AT S with:

Unparalleled Ease of Use

The LightWalker incorporates an easy-to–use colour touch-screen, with an adjustable tilt along with 80 customizable pre-settings covering more than 40 different applications.

Unique to Fotona Laser systems, the LightWalker’s patented OPTOflex® Er:YAG articulated arm transmits a high-power laser beam to the hand-piece, while maintaining the quality of the laser beam to ensure precision and repeatability even at the highest settings.

The OPTOflex® arm is perfectly balanced during use; making hand-pieces completely weightless in your hand. OPTOflex® allows a maximum degree of control and  full range of motion, therefore allowing smooth manoeuvring of the hand-piece and improving treatment precision and ease.

The integrated spray water container means that you don’t have to rely on any water mains outlet, making your laser system exceptionally mobile and hassle-free. The container is handily located at the back of the system for easy access for refilling. In addition, the water is heated to body temperature, avoiding cold sensitivity reactions during procedures.

LightWalker also has an optional wireless foot-switch for laser activation. This avoids unnecessary tangling and any potential trip hazard.

Built for efficacy and safety

In the LightWalker Dental Laser series, both the Erbium:YAG and the Nd:YAG “gold standard” laser wavelengths are produced by solid crystal lasers that can significantly outperform Diode lasers in terms of both the peak power generated and the range of pulse durations available to choose from.

With the advent of Fotona's QSP (Quantum Square Pulse) technology and higher output power, the LightWalker AT S has established new standards for ablation and cutting speed. This accelerated cutting speed provides LightWalker users with the speed and precision demand of a modern dental practice, while simultaneously increasing patient comfort.

To complement the superior power and speed detailed above; the homogeneous absorption of the Nd:YAG laser in soft tissue results in controlled tissue vaporization with simultaneous coagulation, for superior healing and disinfection.

Lightwalker's tipped and tipless Er:YAG hand-pieces have an integrated air/water spray with adjustable water temperature for additional patient comfort, together with a quick-disconnect system for greater convenience and easier sterilization.

To date, over 15 specialized hand-pieces are compatible with LightWalker systems.

Automatic Hand-piece Detection – for Ease of Use

In addition, the LightWalker AT Laser system has an automatic hand-piece detection system which knows exactly which hand-piece you have picked up and automatically restores the last-saved parameters for that hand-piece.

The LightWalker AT / AT S is the first Erbium-based dental laser on the market to have digitally controlled hand-piece technology, providing dentists with entirely new treatment possibilities and unmatched levels of precision that have not been seen before in the world of dentistry.

Three models to choose from, according to your budget and clinical needs.

The AT and DT LightWalker models are equipped with dentistry’s two most effective laser wavelengths; namely, Er:YAG and Nd:YAG for no-compromise dentistry.

The combination of the two optimum wavelengths in one laser system enables Dental Practitioners to perform not only single-wavelength but also dual-wavelength (TwinLight®) treatments. Being able to use both wavelengths in a treatment makes optimum use of the unique laser-tissue interaction characteristics of each wavelength. For example, Nd:YAG laser energy is superior for coagulation and deep disinfection, while Er:YAG is uniquely efficient at ablating hard and soft tissues.

Combined, they can greatly expand the range of treatment possibilities and dramatically improve the outcome of laser assisted treatments. 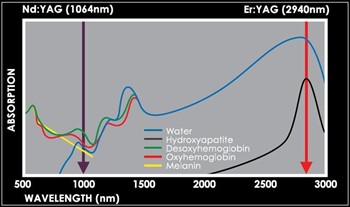 Fotona provide a range of hand-pieces for the Lightwalker Dental Laser range.
Download the Dental Hand-piece Brochure for full details of the hand-pieces available for each model

Typical Before and After images

Step 2:   Er:YAG is used to thoroughly remove calculus from the root surface.

In the TwinLight® treatment, a revolutionary photoacoustic streaming method is employed, as the first step, utilising the power of the Er:YAG laser to generate non-thermal photoacoustic shock waves within the cleaning and debriding solutions introduced in the canal. As a result, the canals and subcanals are left clean and the dentinal tubules are free of a smear layer.

This powerful photon-induced photoacoustic streaming method, available only with Fotona dental lasers, is equally effective for final water rinsing prior to obturation.

Following this, the second step uses the deeply penetrating Nd:YAG laser to decontaminate dentinal walls up to 1000 μm deep.

The high peak-pulse power of the Nd:YAG energy in the Fotona LightWalker laser plays a vital role here as it induces maximum temperature pulsing for eliminating bacteria.

Initial removal of granulation tissue from the alveolar bone and connective tissue with Er:YAG laser is selective. The bactericidal effect of Er:YAG on the surgical site is highly effective and the implant surface is completely cleaned without chemicals.

The subsequent Nd:YAG treatment step promotes faster healing by decontaminating and bio-modulating the tissue. Inflammation, swelling, and bleeding of soft-tissue lesions, which may lead to bone loss, can be handled without surgery, and healthy peri-implant tissue assures greater long-term implant success.

Because the Er:YAG wavelength with LightWalker is used in a safe mode, there is no danger of thermal damage to the surrounding bone and no significant alterations of the implant surface, as is caused with other lasers. There is no mechanical, chemical or any other means of trauma during the entire treatment. 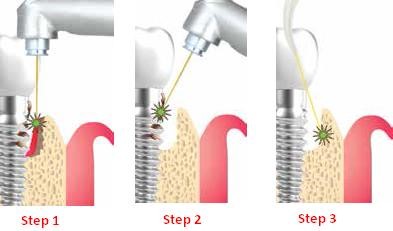 TouchWhite® patented tooth whitening employs the fact that Er:YAG laser is absorption most strongly in water, which is the major component of aqueous bleaching gels.

This means that no additional absorbing particles are required in the bleaching gels.

Due to its high absorption in the aqueous-based bleaching gels, the laser beam is fully absorbed in the gel and does not penetrate to the hard tissue or the pulp. All of the laser energy is thus effectively used for the heating of the gel. There is no direct heating of the dental tissue and the pulp, as is the case with other laser-assisted whitening methods.

There is also no risk of accidentally damaging the hard dental tissue as the laser fluence of every laser pulse is set to be significantly below the ablation threshold for dental tissues.

As a consequence, the procedure can be performed with a minimal undesirable thermal burden on the tooth, and the tooth whitening speed can be safely increased by 5 – 10 times.

The patented NightLase® Treatment is a fast, non-invasive means of increasing the quality of a patient's sleep.

NightLase® lessens the effects of sleep apnea and decreases the amplitude of snoring through the use of gentle, superficial Er:YAG laser light. No anesthesia is used in this treatment.

During NightLase® treatment laser light gently heats the dermal layer, causing tightening of the tissues without damage or adverse effects. It is gentle enough to be used on the sensitive tissue inside the mouth, but strong enough to provide clinically efficacious heating.

NightLase® is easy for any dentist to perform and has a high success rate in producing a positive change in sleep patterns. Research has shown that NightLase® reduces and attenuates snoring and provides an effective, non-invasive technique to lessen the effects of sleep apnea. 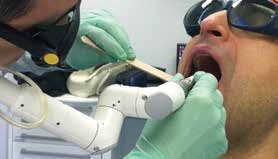 The following Clinical Papers might prove useful to you in a greater understanding of the laser technology involved.

2. - Review: Comparison of Er:YAG and Er,Cr:YSGG Lasers used in Dentistry